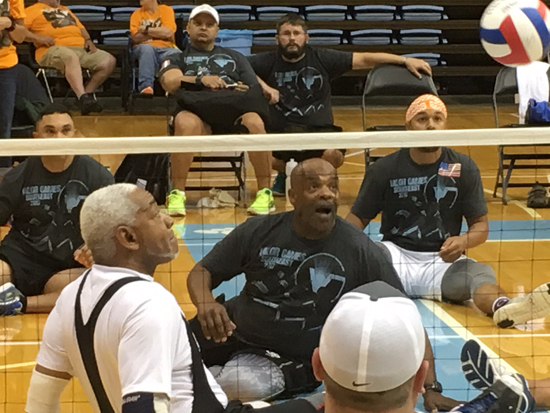 Research Triangle Park, NC (May 25, 2017) – Reverberating around the Dean Smith Center at the University of Chapel Hill are the exhortations that accompany any volleyball game: “Over, over, over!” “Coming to you! Coming to you!” “It’s out! It’s out!”

Cheers go up and backs are slapped before faces reset with determination as the next server, ball spinning in his hand, eyes his intended target on the other side of the net.

Even with a prosthetic leg stashed under the scorer’s table, it becomes easy to overlook that all of the volleyball players here at the Valor Games Southeast are seated on the floor.

Providing that sense of normalcy for wounded service members and veterans is only one goal of the three-day Paralympic sports competition, which brought 125 athletes to the Triangle during this week sandwiched between Armed Forces Day and Memorial Day. Bridge II Sports, the Durham nonprofit that has coordinated the games the past five years, hopes the competition also gives those facing life with a disability more confidence as they use sports to learn to overcome challenges.

For William Ruffin (pictured below), currently stationed with the Army’s Warrior Transition Battalion at Fort Bragg, the games offered a sense of camaraderie among all military branches that he found comforting. 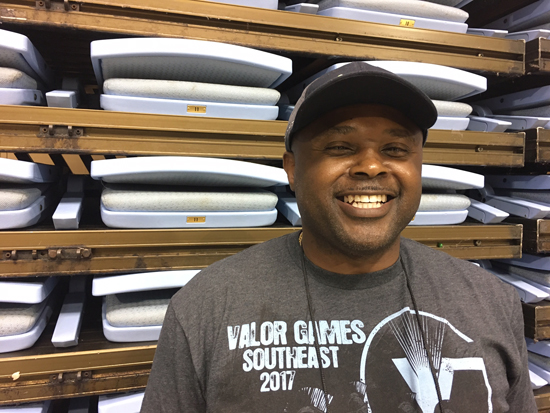 “I just love everyone coming here together as one,” says Ruffin, a Maryland native who spent six years in the Marines before joining the Army 19 years ago. “Meeting new friends, sharing your experience with everyone, hearing about their injuries. I just love being here.”

This was the first Valor Games for Ruffin, who completed two tours of Afghanistan and two in Iraq as an infantryman and later a combat security expert. He suffered severe back and knee injuries during one of his deployments when an IED exploded and crumpled the tank he was riding in.

“It’s very important to be around other people who understand,” Ruffin says. “Not to take away anything from family and friends. Everyone wants to help. But you don’t really know how to help if you don’t really understand. Talking to someone here who walked the walk you walked, it really helps a lot.”

In addition to sitting volleyball, the Valor Games offer boccia, archery, indoor rowing, powerlifting, table tennis, wheelchair basketball, cycling, shotput and kayaking, with events divided among the Smith Center, Cameron Indoor Stadium at Duke University and Lake Crabtree in Wake County. GoTriangle, GoDurham, GoRaleigh and Chapel Hill Transit donate buses and operators each year to transport the athletes between their hotels and the games, which are free to participants because of event sponsors. (From left,  GoTriangle drivers Angela Judge, Jonita Purdie, Larry Villines and James Hall drove buses to the games this year.)

“I have the highest level of pride in my organization for helping with the games,” says Joe McMiller, assistant operations manager at Chapel Hill Transit and a 14-year military veteran who deployed twice to Iraq. “This will be my first year helping, and it gives me an opportunity to give back and spend time with my brothers and sisters in arms. Uniform or no uniform, still serving or not serving, we are still one big family.” 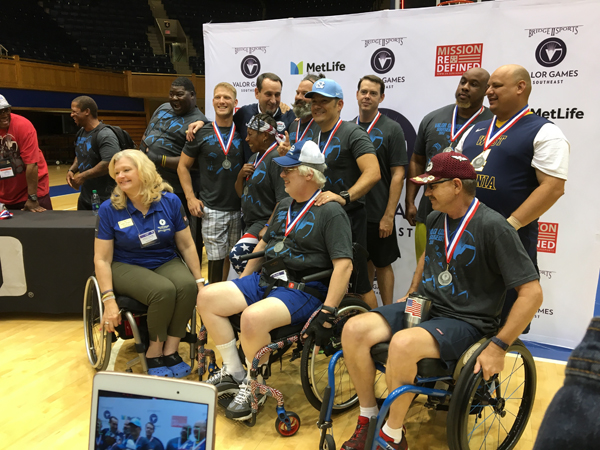 Randolph Lynch, safety and training manager for Durham ACCESS, also was happy to be helping transport some of the 30 athletes using wheelchairs.

“They asked for volunteers, and I thought it’d be a good cause to give back to some of the veterans,” Lynch says. “I used to live in Fayetteville so I am very familiar with veterans and disabled veterans.  It makes me feel very good to be able to give back. Not everything takes a whole lot to contribute. Every little bit counts.”

Richard Roberts, a fixed route supervisor at Chapel Hill Transit, spent six years in the Army in the mid-1980s and was helping with the games for the second time.

“We get to hug them and shake their hands and give them that encouragement just to get out and do,” he says. “I wish people would come see them in competition. It’s a sight to see a lot of  them get out there with devices, shoot a weapon, play volleyball, play basketball in the chairs. It’s eye-opening -- in a good way.”

High in the stands at the Smith Center, GoTriangle bus operators Larry Villines and James Hall, who with fellow GoTriangle operators Jonita Purdie and Angela Judge had transported athletes that morning, repeatedly use the word “amazing” as they watch the athletes compete in the volleyball, air rifle and boccia events below.

“They go out and fight for the country then they get wounded, and the ones who can come here and do this and take advantage of it, they are amazing,” says Hall, who is helping with the games for a third time. “These guys are totally committed. And they play with gusto. I’m just amazed. They make me realize everything I take for granted.”

For Villines, a veteran of the 82nd Airborne stationed at Fort Bragg in the late 1960s, the games are personal.

“Just to see some of my comrades, it makes me feel good,” he says. “They’ve got this mentality to get out there and go hard. It’s good they’re getting this recognition. I just enjoy being around them. Telling war stories, the different places they’ve lived, where they’ve been. I like hearing about it. “

During one volleyball game, Army veteran James Brown sits middle center of the net, awaiting the coming serve. Brown, who resides in Durham, lives with depression and service-related neuropathy, or pain and numbness in his hands and feet. He says the Valor Games give his mind something happy to focus on.

When the ball barely clears the net, Brown swats it to an empty spot on the other side, pumps both arms in the air and smiles.

Point. One for his team and one of pride.

Founded in 2007, Bridge II Sports is a Durham-based nonprofit that provides opportunities for adults and children with physical disabilities to play team and individual sports throughout North Carolina. In 2012, Bridge II Sports was named the Paralympic Sports Club of the Year by the U.S. Paralympics. Visit www.bridge2sports.org to learn more about the organization and its mission.