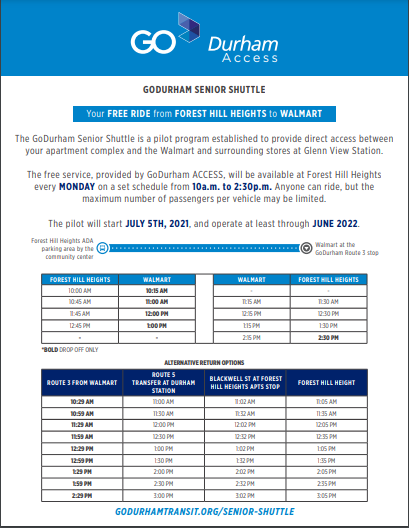 DURHAM (JULY 1, 2021) – Helping Durham’s senior citizens who sometimes go hungry because they can’t access food is the goal of a new pilot program that will make free scheduled shuttles available between five selected living complexes and a nearby grocery store.

The City of Durham program, funded through the Durham Transit Plan, was approved in 2020 but was delayed because of the COVID-19 pandemic. The shuttles will start July 5 and will be managed through the paratransit GoDurham ACCESS service.

GoTriangle, GoDurham and End Hunger Durham have been working on creating the program since a bus trip in September 2019 sowed the seeds of an idea. End Hunger Durham had asked community engagement specialists from the transit agencies to show senior citizens who live at Durham Hosiery Mill Apartments how to take the bus to a nearby shopping center.

Many of the residents said they had gone without food sometimes because they simply couldn’t get to any stores. More than 14 percent of North Carolinians were food insecure in 2017, with the percentage topping 16 percent in Durham County.

The USDA defines food insecurity as an occasional lack of access to enough food for an active, healthy life for all household members. Food insecurity may mean a household is having to decide between paying for important basic needs, such as housing or medical bills, and adequate foods.

“The City of Durham is extremely excited to partner with GoTriangle, GoDurham and End Hunger Durham to increase accessibility options for our senior community,” says Sean Egan, Durham’s director of transportation. “The City of Durham and GoDurham are committed to giving our residents freedom to move throughout our community and access the places and programs they need in order to live their lives to their fullest. This program is another step in fulfilling that commitment.”

Betsy Crites, executive director of End Hunger Durham, put together a proposal for a free circulator service to help get older Durham residents from their homes to low-cost stores. Chapel Hill Transit has had a similar program for more than six years that exceeded all ridership expectations.

After initial conversations among the transit agencies and the Durham County Board of Commissioners, transit planner Andrea Neri was tasked with drafting a proposal for how a shuttle service might work.

GoDurham ACCESS will operate the fare-free service hourly between 10 a.m. and 2:30 p.m. one day a week between each of these communities and the Walmart at Glenn View Station because surveys of seniors in the area indicated that Walmart is the most popular grocery store. It sells a wide range of goods, including pharmaceuticals, and there are other stores within minimal walking distance.

No advanced booking is required to ride the shuttles. For information on the location of the bus stop and scheduled departure times, please download a route brochure found here. 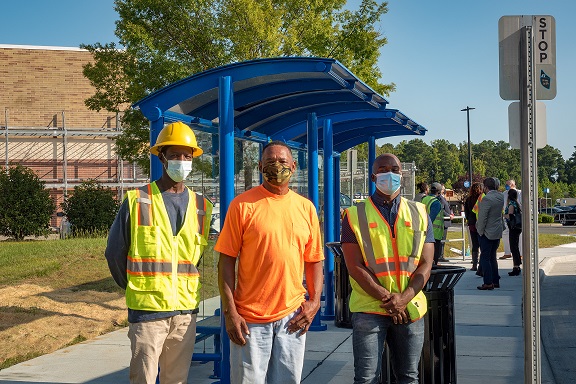 When done shopping, residents can catch the shuttle home from the GoDurham Route 3 bus stop only 250 feet from the main Walmart entrance, though the service will adhere to the GoDurham ACCESS Mobility Service Guide depending on conditions. A new bus stop, left, opened at the site in September 2020.

Neri worked with GoDurham ACCESS to see what travel patterns already existed between apartments and grocery stores so that he could draft the schedules and routing to capture existing demand. The new free shuttles will cater to the seniors living in the selected apartment complexes but will be open to the general public as well.

“Chapel Hill Transit realized early on that a senior shuttle was very helpful in taking demand off regular paratransit service because it’s able to concentrate the demand and the need during certain hours,” Neri says. “In Chapel Hill, ridership is very strong, and they told us to be ready for success. We’re all just very excited to get this service up and running for Durham’s residents who need it.”

The GoDurham Senior Shuttle pilot program is funded through June 2022 and could be extended into future years or to other senior communities if it is successful in improving access to food.