Five Myths about Riding the Bus 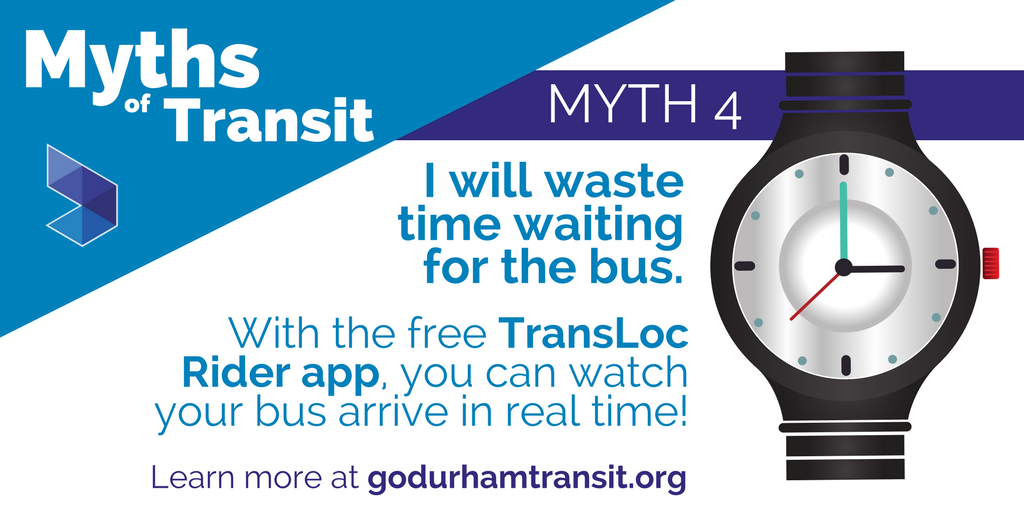 MYTH 1
PERCEPTION: Riding the bus isn't safe
FACT: Riding the bus is about 60 times safer than driving a car when you consider traffic fatalities per mile traveled in the U.S., according to research published in the Journal of Public Transportation in 2014.

MYTH 2
PERCEPTION: Only people who have no choice ride the bus.
FACT: More than one-third (about 37 percent) of GoDurham riders have at least one car but choose to take transit, according to our most recent (2015) rider survey

MYTH 3
PERCEPTION: I can’t easily get to a bus route.
FACT: Driving a short distance to a Park-and-Ride lot is an easy way to get to your bus route, save on gas and reduce your time behind the wheel. Browse our park-and-ride list to find numerous park-and-rides around the Triangle located near bus routes.

MYTH 4
PERCEPTION: I will waste time waiting for the bus.
FACT: With the free TransLoc Rider app, you can watch buses move in real time and save time by arriving at your stop just 5 to 10 minutes ahead of your bus arrival time. For details, visit our TransLoc page.

MYTH 5
PERCEPTION: I shouldn’t support bus service: I won’t use or benefit from it.
FACT: Actually, bus service brings a reduction in traffic and a drop in accidents that helps everyone.  According to 2012 research of 101 U.S. cities by the Federal Transit Administration and National Highway Traffic Safety Administration, as transit travel increased per capita, total traffic (including pedestrian, cyclist, automobile occupant and transit passenger) fatalities tended to decline significantly.