Have your say on GoDurham plans to restructure routes, add service frequency 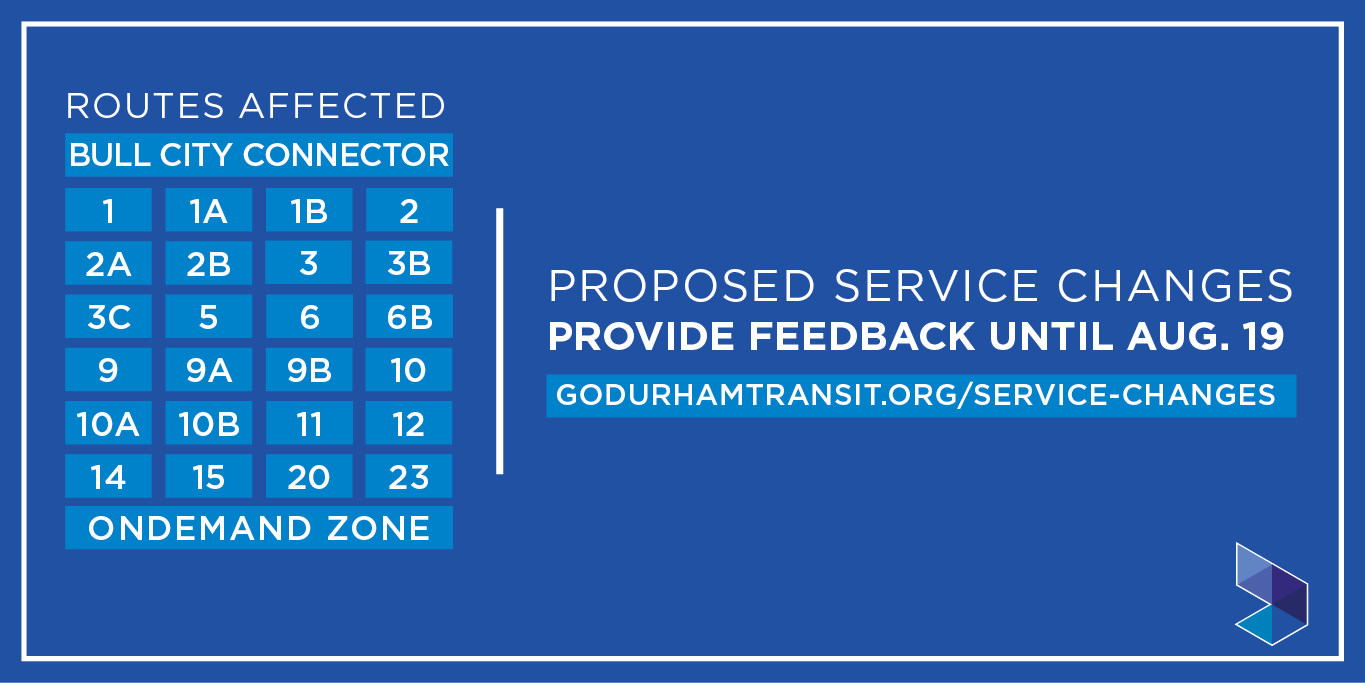 The latest transit-improvement plan calls for adding 15-minute service on two more high-demand routes and 30-minute service at night on four other routes. In addition, revised Durham Station arrival and departure times and some combined routes should make the transit network even easier to use, planners say.

Before recommending the improvements, planners reviewed travel markets and existing ridership patterns and gathered public input. The goal of these transit investments is to improve the reliability, on-time performance and passenger experience on GoDurham routes.

“When we talk to the people in Durham about how to improve the transit service, we hear that the routes need to run on time and more often, especially at night, and that they need to connect better to other routes,” says Jenny Green, transit service planner. “While this plan calls for the end of the Bull City Connector, the money that is saved will be used to provide more frequent service on the busiest routes at all times of the day and week, with better connections at Durham Station. That’s a win for the Bull City.”

The Durham City Council already has reviewed the plan and incorporated it into the city budget, which was approved in June. Once the public comment period has ended, planners will incorporate any necessary changes and present the revised plan to the City of Durham and Department of Transportation for approval in August. The changes would be implemented Jan. 25, 2020.

GoDurham already has three corridors where buses arrive every 15 minutes during the day Monday through Saturday: one along Chapel Hill Street, one along Fayetteville Street and one along Holloway Street.

The new plan would add 15-minute service along Main Street and Erwin Road, served by Routes 11 and 11B.

The plan also would add service every 30 minutes on nights and Sundays along Holloway Street, Fayetteville Road to Southpoint, Main Street from Alston Avenue to Anderson Street and Erwin Road to LaSalle Street.

Among other changes, Routes 2 and 15 would be combined into one route that provides service to Brier Creek every 30 minutes on weekdays and Saturdays, and Route 12 would be restructured to provide connections to Research Triangle Park and the Regional Transit Center, where connections to GoTriangle routes can be made.

“Routes that come every 15 minutes or even 30 minutes or that run later into the night make a huge difference for people who are trying to access basic things, like a senior citizen trying to access a grocery store, or a student living off campus making it to class and work on time,” says Jeffrey Sullivan, a marketing specialist for GoDurham.  “These changes are meant to make our system more accessible and more reliable so that you can depend on us getting you to your location on time.”

Together with Orange and Wake counties, Durham County is working to create a unified regional transit network that provides alternatives to driving on increasingly congested roads and opens up access to more job, education and health care opportunities for everyone.