Every weekday, a GoDurham bus carries Ebony Winston a little closer to her dreams as it shuttles her between her home and the Durham Literacy Center, whose closest bus stop now has a new shelter, bench and other amenities to make Winston’s waiting more comfortable. 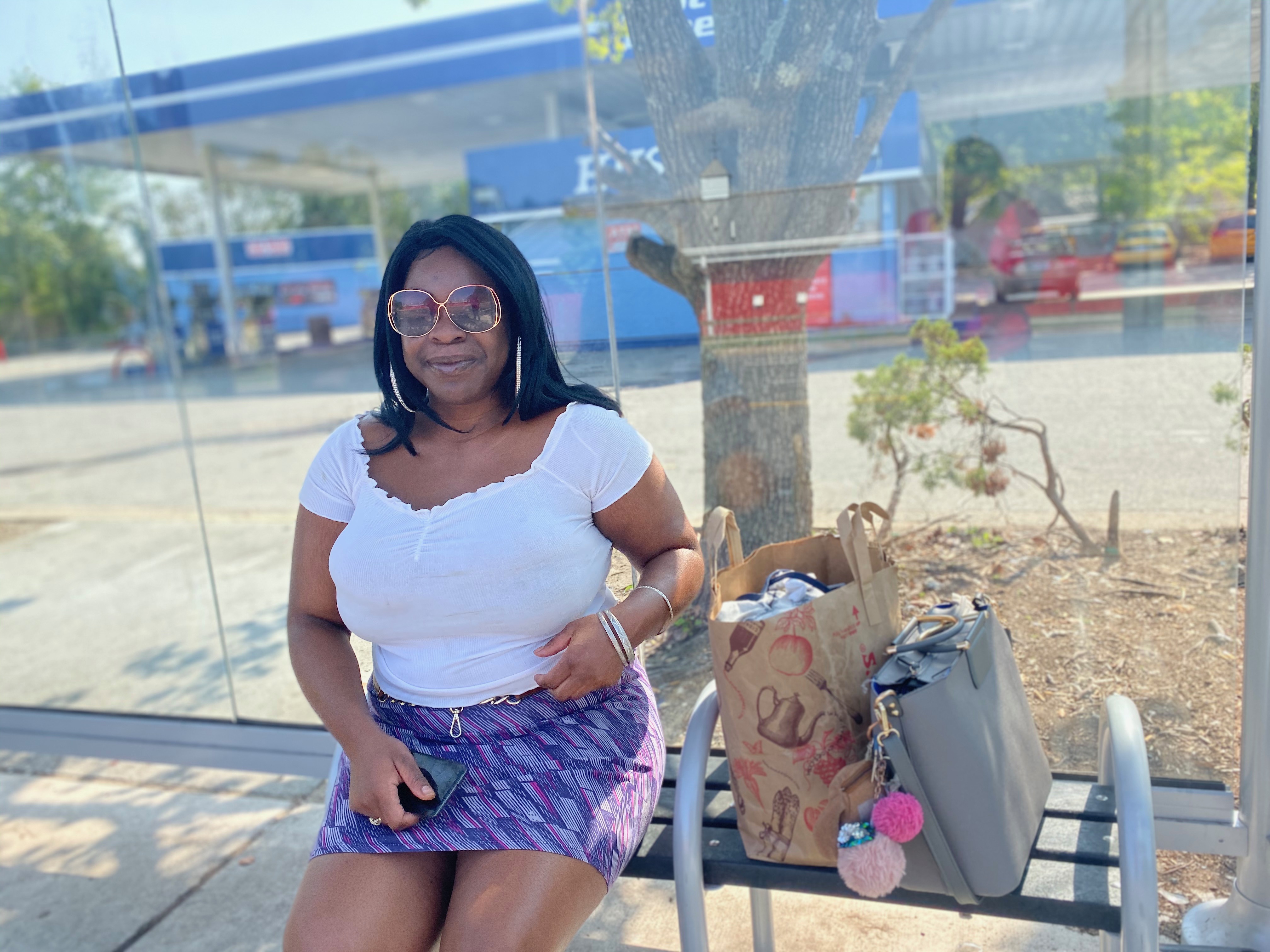 DURHAM, NC (Nov. 6, 2019) -- Every weekday, a GoDurham bus carries Ebony Winston a little closer to her dreams as it shuttles her between her home and the Durham Literacy Center, whose closest bus stop now has a new shelter, bench and other amenities to make Winston’s waiting more comfortable.

“It definitely helps keep it cooler, and it’s safer with the clear glass,” Winston says. “And it makes the city look a lot prettier, too.”

The stop at Chapel Hill Road and Palmer Street is just one of the 19 bus stops that GoDurham identified for the next round of improvements paid for with the half-cent transit-designated sales tax that Durham voters approved in 2012. Eight of the projects have been completed, and the other 11 are under construction.

Five projects now under construction are along GoDurham Routes 6A, 6B, 9A, 9B, and 1B and will include three shelters, four benches, and one Simme Seat, which allows two customers to sit comfortably facing opposite directions. The projects are expected to be complete in December.

The six other stops serve eight routes around Durham and will get four shelters, five benches and some repairs to concrete. Those should be finished in January 2020. 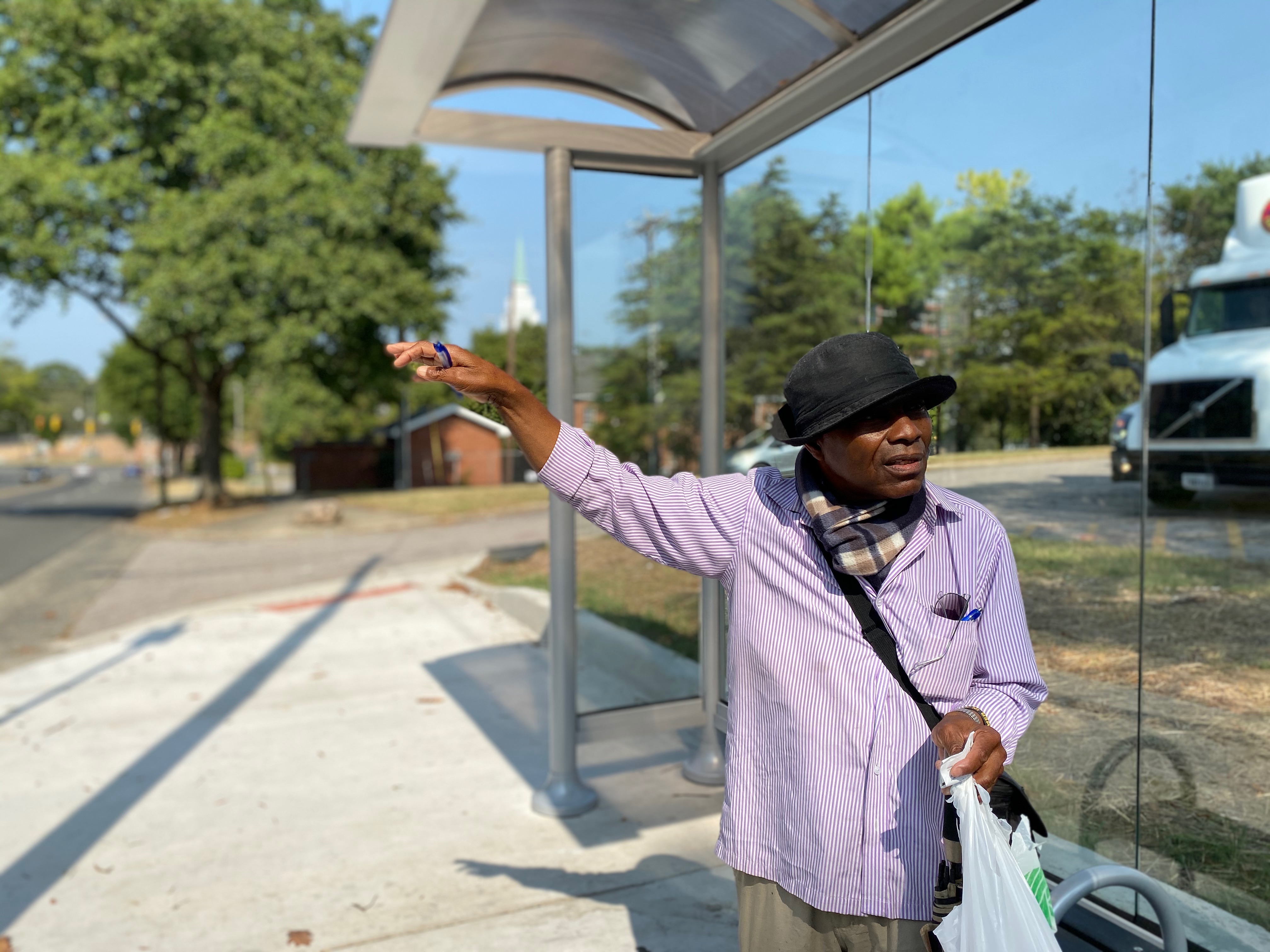 Vincent Payne, left, of Raleigh travels by bus all over the Triangle, riding on GoDurham, GoCary, GoRaleigh and GoTriangle routes. On a recent Tuesday, he was walking to the new GoDurham bus shelter at Lakewood Avenue at Heritage Square.

“I come to Durham every day to see my handicapped friend,” says Payne, who indicated that he especially appreciates the solar lighting on the shelters and the new trash cans. “I come check on him and help him out.”

How bus stops are chosen

Planners also take into consideration the values and priorities of the Durham community, and listening to what riders, businesses, and churches need is part of the process. GoDurham allows members of the community to suggest stops for possible improvements by filling out the form found here.

Installing a new shelter costs about $13,000 for the materials and labor, a free-standing bench is about $2,000, and a Simme-Seat is about $700 to purchase and install. Design costs for each stop can range between $9,000 and $16,000, and providing concrete pads and connections to sidewalks can range between $9,000 and $30,000 or more depending on the site. This package of 19 bus stop improvements will cost about $785,000 to provide including design, construction and amenities.

Durham breaks its bus stop improvements into smaller packages to allow smaller firms to bid on the projects, and to get the work done more quickly. For example, the current package of 19 stops was broken into three groups, which helps small and historically underused businesses bid on the projects. This approach also allows construction of multiple groups of bus stops at the same time.

Five additional bus stop projects are programmed for construction in early 2020, including a significant improvement at the Glenview Station stop, which is the third-busiest stop in Durham behind Durham Station and Wellons Village.

The next phase of bus stop improvements in Durham will target 50 more stops that GoTriangle and the City of Durham Transportation Department identified, in addition to 12 the city is funding through Participatory Budgeting.

In spring 2018, GoDurham improved 25 stops and in April 2019 added Simme-Seats to 25 other stops. Find a list of those improvements and a map of the current improvements here.

About the City of Durham Transportation Department

The Transportation Department is responsible for a broad range of transportation services that include traffic signs and signals, transportation planning, parking operations, street lighting, taxicab administration and bicycle and pedestrian planning. The department also oversees GoDurham and GoDurham ACCESS and leads planning functions for the Durham-Chapel Hill-Carrboro Metropolitan Planning Organization (DCHC MPO), which is the regional organization responsible for planning and programming state and federal transportation projects in the urbanized areas of Durham, Orange and Chatham counties. Guided by the city’s Strategic Plan, the department helps to strengthen the foundation, enhance the value and improve the quality and sustainability of neighborhoods that are necessary for a strong and diverse community. For more information, follow the department on Twitter.