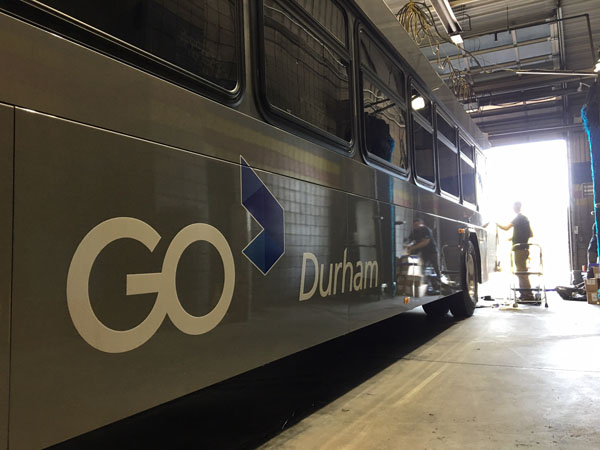 Research Triangle Park, NC (Aug. 24, 2017) — Rolling out around the Bull City this week are 12 new buses, all made in America especially for GoDurham. Six will replace old buses, some in use since 2003, and six were bought with money from the transit-designated half-cent sales tax to provide Durham residents with even more connectivity and reliability.

The 40-foot-long buses, newly equipped with fare boxes and GoDurham labeling, have low floors and diesel engines. They were manufactured by Gillig at a plant in California.

“These new vehicles will help us better serve our customers and make our service even more reliable,” said Brian Fahey, GoTriangle’s transit administrator for GoDurham services. “Our oldest vehicles are 14 years old, and as we retire them, our maintenance team can spend less time on major repairs meant to extend the life of older vehicles and focus on other initiatives to improve the safety and comfort of the fleet.”

Want to see how awesome the new buses are? Find a video at bit.ly/newbuses.

More new vehicles are coming. GoDurham ACCESS has ordered five light-transit vehicles to provide paratransit trips to those unable to use fixed-route services for medical reasons.

In addition to the six new buses, the transit tax has paid for many improvements in service since 2013, including extended Sunday service and additional evening trips.